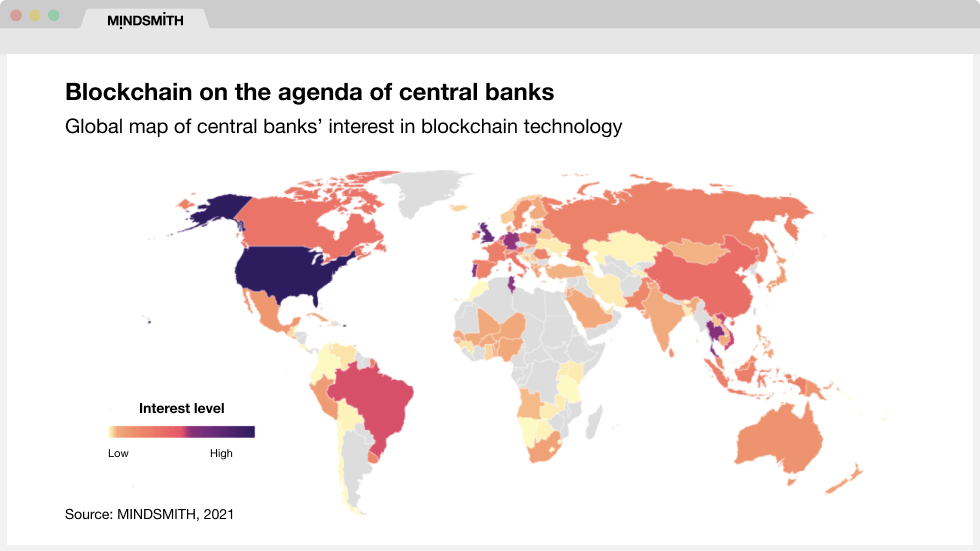 MINDSMITH, a tech think tank, carried out a semantic analysis of the publications of 191 central banks. According to the study, 74% of the central banks globally are interested in blockchain technology. Among the leaders are the US Federal Reserve, the Bank of England and the European Central Bank.

Among the most discussed use cases are central bank digital currencies (retail and wholesale), interbank securities settlement and data exchange platforms.

9 central banks account for more than half of all blockchain mentions by central banks. The undisputed leaders are the US Federal Reserve System, the Bank of England and the European Central Bank.

“Central banks around the world are actively adopting blockchain technology. The «blockchain arms race» has spread to the main financial regulators, and following the high status of players, the scale of global changes has grown, reaching the level of transformation of the financial system’s foundations, such as creation of central bank digital currencies.»

Central banks of the USA and Europe are among the leaders

The central banks of the world, interested in one way or another in blockchain technology, together account for about 75% of world GDP and 67% of the world’s population.

“The Bank of Russia is actively increasing its interest in blockchain technology: from issuing mortgages on a blockchain platform to developing the concept of a digital ruble. The Bank of Russia not the only central bank expressing high interest in blockchain. Today, a set of best practices is rapidly developing among central banks. Their application for making informed decisions is the most effective way to develop successful blockchain projects at the state level.»

We have identified 7 scenarios of blockchain application by central banks

Based on published studies and reports on the official websites of central banks, we carried out review of existing blockchain use cases, which are being investigated by at least one central bank.

MINDSMITH focuses on complex studies, intensive trainings and strategic consulting in the field of high technologies. The company was founded in 2018 as a tech think tank.

We speak both languages of business and technology and can translate both ways. This is how we solve the most complex puzzles. Strong analytics competences and access to the necessary expertise around the world for tailored solutions.